This is a new website. Your feedback will help us to improve it. 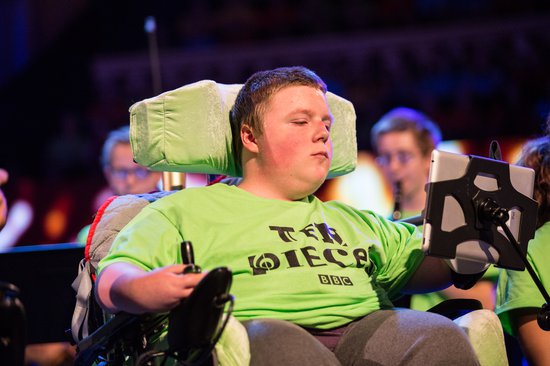 Curtis is a student at Fountaindale School in Ashfield and took part in the Able Orchestra which is an inclusive electronica/orchestral music project developed by IYA.

Initially Curtis expressed that he was not particularly interested in music or arts when the project began!

Since then he became a leading member of the ensemble, taking on key parts of the performance and encouraging his fellow students. He led the digital visuals element in the performance at the Royal Albert Hall as part of the BBC Proms whilst being quite poorly at the time and more recently performed with the Halle Orchestra at the Nottingham Contemporary Gallery. He won an Inspire award in 2017 as runner up for Young Persons Greatest Learning Journey.

This year Curtis applied to attend Confetti Institute of Creative Technologies (Part of Nottingham Trent Uni) and has been accepted on a degree level digital music and gaming course.

"...his decision to go to Confetti has been entirely influence by his involvement in the Able project and we are delighted for him".

Is there anything wrong with this page?